Relationship of wage on internet usage 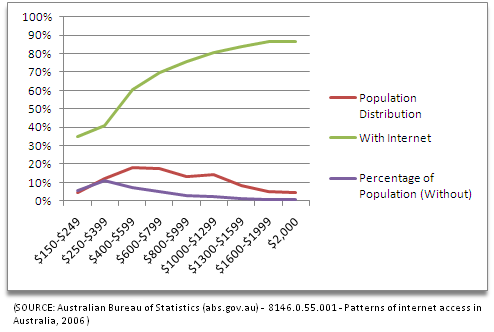 It’s strange that the lower wage bracket isn’t broken down further. There were more brackets in the 2006 data. NewStart allowance is ~$12k per year. We need to know if there’s a point where the “without” trend peaks, I assume it peaks at the lowest wage.

We also need to know where the bulk of the population lies. This can be done by combining with other datasets. It would also be good to overlay other data such as: number of people in the households of such wage brackets, and number of children in households of such wage brackets. The category 120k+ should be removed, we’re not learning much more above $80k.

Can the ABS plan for more categories <40k in all subsequent studies? Can the data be updated more frequently and consistently?

There are common trends, what people most need the internet for, and what we imagine the internet is needed for. I start with the assumption that no more than 25mbps is required per person usually. If someone claims there are future requirements, they need to add it to our spreadsheet, and we’ll update our conclusions accordingly.

Contributions: Please send in any other “web applications” that you can think of which will challenge these conclusions. Eventually, I would like to build a 0-5 years, 5-10 years, and 10-15 years projection based on data, instead of people’s gut feelings.